Saints and the crumbling pillar of social trust

In a comment on the Mark Hoffman Netflix series, Patrick Mason wrote this great insight:

The evilest thing Hofmann did was to kill two innocent people in cold blood. But perhaps the second most sinister thing he accomplished was to undermine our collective confidence in facts. Hofmann was a master forger, yes, but even more deeply he was a master manipulator of one of the pillars of social trust — the ability to agree on what the facts are. When that pillar begins to crumble, it’s not just the Saints and the nerds who have reason to worry.

That concept of "social trust" expresses my disagreement with the way the current correlated history has been edited to accommodate M2C.

For example, the Saints book quotes Lucy Mack Smith's history 127 times. That's a legitimate and emphatic endorsement of her credibility and reliability, as well as her unique relationship with Joseph Smith and the insights that ensued.

But Saints omitted every reference to Cumorah, even though Lucy's account of what Joseph told her Moroni told him includes some important details available nowhere else.

As Patrick Mason pointed out, everyone interested in Church history should at least agree on what the facts are.

But Church members can't agree on the facts when they don't even know the facts.

Here are two examples of what I'm referring to.

A common theme among LDS scholars lately is that Joseph never identified the hill as Cumorah, or at least not until he wrote the letter that became D&C 128:20, by which time, according to the scholars, Joseph had adopted the false tradition that Cumorah was in New York. This false tradition, supposedly, was created by unknown persons in the early days of the Church.

Yet we have David Whitmer claiming repeatedly that he first heard about Cumorah directly from the divine messenger who had the abridged plates. This was in June 1829 before he had ever read a word in the Book of Mormon. We have Parley P. Pratt saying in 1831 that Moroni called the hill Cumorah anciently. We have Martin Harris referring to the hill as Cumorah in 1829.

What explains these accounts?

It's actually very simple and clear.

Lucy explained that Moroni identified the hill as Cumorah during his first visit to Joseph Smith. 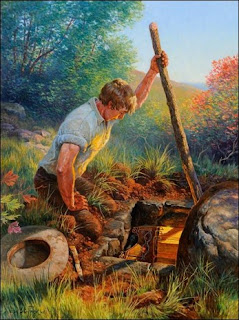 Now Joseph beware or when you go to get the plates your mind will be filled with darkness and all manner of evil will rush into your mind. To prevent you from keeping the commandments of God that you may not succeed in doing his work…

the record is on a side hill on the Hill of Cumorah 3 miles from this place remove the Grass and moss and you will find a large flat stone pry that up and you will find the  record under it laying on 4 pillars of cement— then the angel left him.

https://www.josephsmithpapers.org/paper-summary/lucy-mack-smith-history-1844-1845/41
Certainly, historians and everyone else can debate whether Lucy accurately remembered what Joseph told her, or whether her memory was "tainted" by a false traditions started later by Oliver Cowdery or someone else.
But to erase this important account from Church history, as presented in Saints, just to erase and de-correlate the New York Cumorah for ideological reasons is just as destructive to the pillar of social trust as Hoffman's effort to create new history through forged documents.
Censoring actual history is the mirror image of forging new history.
Apart from the Cumorah element, Lucy's recollection is significant because of the detail about the grass and moss. We don't get that detail anywhere but in Lucy's account. Such a detail helps explain why the stone remained hidden for all these centuries. Plus, it would help inform LDS artists. In the painting above, for example, we have a large boulder with no moss on it. Such a stone would not have concealed the stone box but would have called attention to it over the centuries.
_____
BTW, this reference brings up an anomaly in the Joseph Smith Papers. I did a search for "moss" and the reference above did not appear in the results. The only result from Lucy's history was this page:
https://www.josephsmithpapers.org/paper-summary/lucy-mack-smith-history-1844-1845/44
On that page, the section about moss is lined out, although it's not lined out on the original manuscript. I'm sure there's a reason for that, but I can't tell what it is.
The point here is that the above reference to moss in connection with Cumorah is not indexed in the search function.
Actually, if you search in the Joseph Smith Papers for "Cumorah" several of the references don't show up. Try it yourself. (click to enlarge) 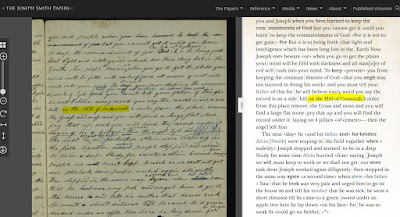 I have found similar gaps in other databases, where a search term does not produce a result even when I'm looking at a document in the database that includes the search term. It's impossible to tell whether this was an oversight, a programming error, or intentional.
Regardless, this situation leaves us with a double problem involving the pillar of social trust.
(i) Saints omits important information about Moroni's visit to Joseph Smith.
(ii) The Joseph Smith Papers don't index this information even if you search for specific terms such as "Cumorah" and "moss."
How can we possibly have social trust when such important information is censored, withheld, unindexed, and undiscussed?
_____
A second example is the one I've brought up before, about the re-telling of the time when Moroni chastised Joseph Smith when he was coming home from Manchester. This event took place in January 1827, before Joseph obtained the plates. He referred to the hill as Cumorah on this occasion. Obviously, he could have learned the name Cumorah only from Moroni.
The Saints editors simply omitted the reference to Cumorah. It's unbelievable.
https://saintsreview.blogspot.com/2018/09/chapter-4-be-watchful.html
Here, I'm putting it in a side-by-side comparison so you can see how deliberate this editing was. Note how the section in the 1844-5 version was lined out on the original document, yet the Saints editors chose to use it instead of the revised 1845 version. In the 1845 version, Joseph referred to Cumorah to explain where he was when the angel chastised him. This is an important detail not only to explain where the event took place, but to show that Lucy and her husband knew exactly where the hill was when Joseph referred to Cumorah.
Readers of Saints never learn this.
Nor do readers of the Joseph Smith Papers. This reference to Cumorah also does not show up in their results if you search for "Cumorah."

We can read Saints , volume 1, two ways.  1. Read (or listen to) the narrative and just accept it the editors' spin on Church history. 3... 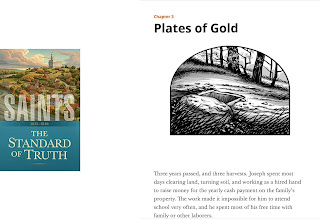 jonathan3d
I blog about LDS topics from a faithful perspective, although I disagree with much of what LDS intellectuals teach. I also blog about science, art, economics, legal and environmental issues. I've lived in Europe, Asia, Africa, and North America and I've visited every continent and over 65 countries for work and fun. I've had over 50 books published. The photo is me on a plane in 2020.